Woah or Whoa: What Is Your Choice?

Introduction
Whoa or Woah?
1 Popularity Throughout the Years
2 Uses of Whoa and Woah
3 What Do People Say About Woah or Whoa?

Is it whoa or woah? How exactly do you spell that little exclamatory word that rhymes with “low”? According to dictionaries, “whoa” is the correct spelling, but words that are mainly spoken tend to have varied spellings when people write them down. However, the word “whoa” is not only misspelt on blogs and discussion board posts – you also see the misspelling in lyric sheets, film subtitles, YouTube videos, and many other sources of writing. 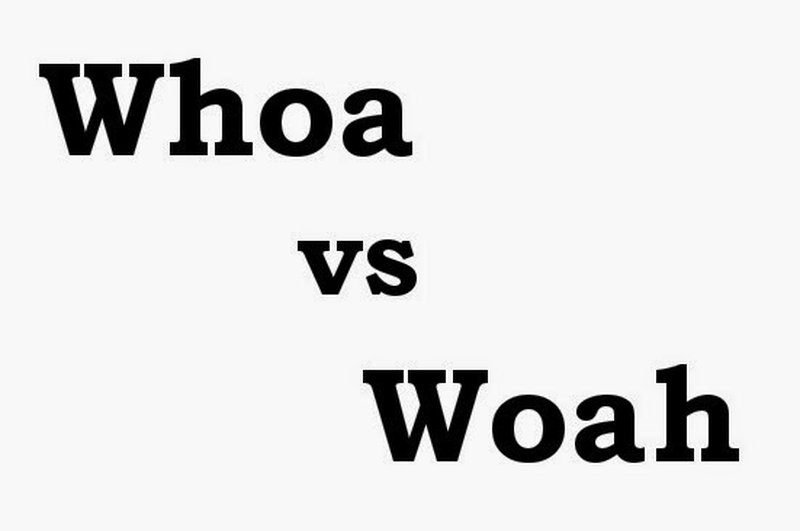 Popularity Throughout the Years

In the Penguin English dictionary, “whoa” is described thus, “used as a command, e.g. to a horse, to stand still.” “woah” isn’t mentioned at all. A quick search of Google Books Ngram viewer, which records published incidences of words, shows that “whoa” has been going through phases of popularity since 1700. By contrast, “woah” was only mentioned for the first time in 1803, and has been used very little at least until the 90s with the advance of the internet age. This would be the end of the debate, but it turns out that there’s more to this little word than meets the eye.

Uses of Whoa and Woah

“Whoa” was originally used literally to slow down or stop a horse:

It can also be used in a figurative sense, to ask someone to slow or stop:

From this sense, it can be taken further, and used in circumstances where the person speaking wants to slow the conversation down to take in something that may seem unbelievable:

- Because that cop's looking for you. I gotta get you a new identity, some new clothes, a different car would do for now. Put these on.

It can be even further generalized to mean “Wow!”:

- Hey, do you want to see something cool? Come on.

And then Bill and Ted’s Excellent Adventure repurposed the word into a one-size-fits all southern California stoner-surfer saying:

[Bill and Ted meet themselves]

Ted: OK wait. If you guys are really us, what number are we thinking of?

Keanu Reeves and Alex Winter seem to pronounce the word more as “woe” than “whoa”. Indeed, the “woah” spelling seems more appropriate for meaning “wow” than “whoa” ever did. “woah” may also be increasing in usage thanks to the internet and the lack of copy-editing in web writing, so it may, one day, become a recognized variant. However, the only official version of the word appearing in dictionaries remains “whoa”. You would only use “woah” to indicate a particular accent.

There is a slight difference between British and American usage of the word. The Oxford English Dictionary has recognized the following spellings over the years:

The “woah” spelling is also being frequently used in British newspapers, magazines, websites, and advertisements. Therefore British English dictionaries may in fact be the first to include “woah”.

So what should you do, and which word should you choose for your writing? Here are some tips:

What Do People Say About Woah or Whoa?

“I grew up in Alberta, Canada, and grew up with the ‘woah’ variant, but I’ve also seen ‘whoa’ lots too. I think it’s a US phenomenon, a bit like the omission of the ‘u’ in color and favorite, for example. ‘Whoa’ and ‘colour’ will be considered more ‘correct’, just because of their historical use and the origins of the words, regardless of what’s in my American dictionary.”

“This misspelling has probably come about, or at least been revived by the internet. All those 13-year olds who know there is an ‘a’ and an ‘h’ somewhere in the word, but are too ignorant and lazy to look up the correct spelling, and then they never learn better. With regard to pronunciation, I think ‘whoa’ should rhyme with ‘Noah’.”

“I’m really not sure whether to use woah or whoa, as I see a mixture of both spellings. It’s probably more a matter of personal preference than anything to do with the internet.”

“I don’t know if I’m really an internet-loving person, but I’ve always thought it was spelt “whoah”, so that’s how I’ve written it down. I’ve been thinking that right up until I read this article.”

“I intentionally spell it ‘woah’, because it just feels right to me. ‘Whoa’ reminds me too much of horses, and whenever I say this word, I’m not speaking about horses, at least in most times. Although it’s written down differently in the dictionary, I don’t think spelling really matters for exclamations. It’s a bit like debating whether you should write ‘Ha ha’ or ‘He he’ for laughter. It’s nothing to do with the internet – just another means of getting sounds, emotions, and expressions written down.”

Wait for your response to the use of whoa or woah!