Weather in Costa Rica in August

Another popular month for families to take advantage of the summer school break is August. A lot of travelers who wait until August do this for the simple fact of the lack of availability of accommodations of quality during the month of July. The beginning of the month is actually one of the heaviest travel periods of the year; however things slow down quickly to normal again towards the end of the month. Before you make any travel plan, it's better to know about the weather in Costa Rica in August.

What’s the Weather in Costa Rica in August Like?

Even though in general Costa Rica is in the rain or green season, the start of the month usually has a drier start because of the mini dry seas. This is the period where the rainfall is decreased significantly from July through mid-August. Gradually, the rains start to pick back up towards the later part of the month. Generally it is a good idea to have light rain gear wherever you go, especially on the Caribbean side.

Through August, the Norwest Pacific is mostly still dry. Daytime temps are generally in the upper 80s to the low 90s. The rains are beginning to become more frequent, however they usually occur in the late afternoon and early evening.

As the green season continues, the South Pacific is getting more wet. The rains each day start to happen earlier in the afternoon, become heavier and last longer. Temps will remain in the upper 80s and lower 90s.

The Caribbean starts to dry out while this is happening to the Pacific. As August goes on, it becomes drier and drier. Temps will still be high with highs during the day around the low 90s.

Arenal and the Central Valley will still be comfortable in August, around the upper 70s. Much like the Pacific coastal areas, the start of the month generally is nice with daily showers in the afternoon. As the month goes on, rains are more frequent, with harder rains in September. 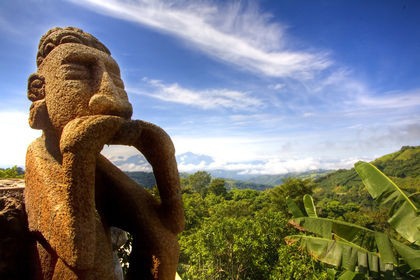 What’s the General Weather and Climate in Costa Rica?

Apart from the weather in Costa Rica in August, knowing the general weather and climate is equally important if you're planning a trip to the place.
1

During the drier months, each is hotter, drier and dustier than the last. It is basically like a desert and most trees go into a state of hibernation. The green forests turn grey and yellow and only trees with the deepest roots can reach water to keep their foliage. Oceans are clearest at this time, so it’s perfect for snorkeling and scuba diving. The beaches are also at their cleanest since there’s less organic waste going down rivers into the ocean.

Costa Rica has lots of lightning storms during May, which is quite beautiful. You could see giant swarms of crabs on beach roads and the beaches. Plenty of new foliage appears so the jungle is vividly green. Lots of bugs hatch after their hibernation, making this the buggiest month all year. Some restaurants are also closed down so the owners can take a break after five months of busy season.

The rainy season is in full swing by June, and the Jungles are green and lush again. Bugs have settled down with the balance returned to the rainforest. It usually rains in the late afternoon and evenings and this is a very nice time of year to visit Costa Rica.

The most favorable months to visit the pacific coast of Costa Rica are July and August. The rainforest is totally lush and it is cooler than in the summer months (Dec.-Apr.), plus there is no dust. At this time of year, there is often one or two little summers where there is no rain for a week or two. There are a lot of tourists, but not as many as in the dry season.

The first half of September is usually like August, however generally September is one of the months that is wetter, and it gets wetter on average as you get closer to October. Some of the restaurants and some hotels might close during this time of year.

This is the rainiest and muddiest month. It’s not good for scuba and snorkeling, however there are many time surfers and rainforest enthusiasts and a couple of honeymooning couples which don’t bother to read about the weather. As far as tourism goes, this is the slowest month so many hotels and most of the restaurants close for improvements and repairs. Anyone who is interested in real estate here will often visit in October to view properties in their worst state.

Every week in November generally will get drier than the ones before it, since the season winds down now. At the end of November, it is a great time to visit, especially around the Thanksgiving holiday.

Many people in Costa Rica say “December is a jewel” because it’s the most beautiful month of the year with the jungle still being green and not much rain. The sky may be blue with beautiful clouds and the ocean waters are becoming clearer. Tourism is generally dead the first two weeks since most people save their travel for Thanksgiving, New Years and Christmas. It is always the windiest month, especially in the San Jose valley area. Photography is best during this month.

When Is the Best Time to Visit Costa Rica?

The dry months in Costa Rica offer up the most sunshine and tourists. Beach-seekers and wildlife enthusiasts come here in mass from all around the world to explore the amazing rainforests and beaches the country has. You can spot Quetzals soaring and green turtles waddling during the dry months. Travel this time of year and you will also find vibrant fiestas all over the country, featuring dancing, bullfights and live music. San Jose has temperatures which stay in the seventies all year, while drier regions along the coast and Northern Plains will see ninety degree temperatures. During December and January, European and North American visitors go to Costa Rica for sun, beauty and a break from the cold months at home. You’ll therefore want to make reservations many months in advance to make sure of availability.

What Events Does Costa Rica Have?

When making any preparations about your trip, be it the weather in Costa Rica in August or the price of accommodations, you may also have to take the events into consideration.