Introduction
Is There a Treatment for Ebola?
Point 1
2 What Is the Outcome Following Treatment?
Experimental Medications for Ebola
Point 1
FAQs on ZMapp as an Experimental Treatment for Ebola
1 How Effective Is ZMapp as a Treatment?
2 Is ZMapp a Therapy or a Vaccination?
3 Why Isn’t Everyone Receiving ZMapp?
4 Will the FDA Make ZMapp Available Under Its ‘Access to Investigational Drugs’ Rule?
5 What Branches of Government Were Involved in Developing ZMapp?

Ebola is a hemorrhagic disease, characterized by fever and, in the later stages, internal and external bleeding.  It is usually fatal and there is no known cure or immunization.

Ebola’s recent outbreak has mostly affected west African countries. Among those in the hot zone are: Sierra Leone, Liberia, and Guinea. The World Health Organization (WHO) reports greater than 4,000 fatalities and 8,300 cases of EVD, making this the largest outbreak since it began keeping records.

The difficulty with EVD in western Africa is three-fold:  an inadequate healthcare system; unreliable access to clean water and fear on the part of the patients, preventing them from seeking early treatment, when it would be most effective. 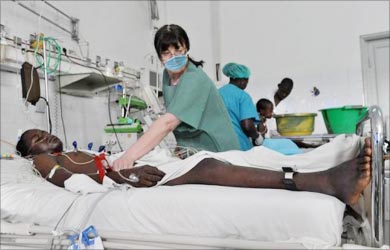 Is There a Treatment for Ebola?

What kills Ebola virus? The U.S. Food and Drug Administration (FDA) has not yet approved any antiviral medications for use in combating Ebola. The current treatment involves treating the patient’s symptoms and keeping him/her hydrated. The earlier someone receives treatment, the better his/her chances of survival are. Basic medical interventions for Ebola are the same as for other viral infections:

In order to recover from EVD, one must have good supportive care and a responsive immune system. Once recovered from Ebola, that patient will have antibodies to that strain of Ebola from anywhere from ten years to a lifetime; however, some patients have recovered from EVD only to develop long-term health concerns, such as joint and eye problems.

What Is the Outcome Following Treatment?

Death can occur in fifty to ninety percent of Ebola cases. Scientists who research Ebola do not yet understand why some patients recover from the disease while others do not; however, it is known that Ebola victims usually have not developed a significant immune response at the time of death.

There are currently four antiviral medications in development in North America. None are at the Phase 1 testing stage, ready for human trials. The FDA has the capacity to grant emergency waivers for use of drugs in cases of crises. The problem, however, is that the supply is so limited that one of the companies developing the antivirals has already run out after being used to treat Dr. Kent Brantly and Nancy Writebol. The details of the drugs being tested are shown below:

The WHO suggest blood transfusions from Ebola survivors as a possible treatment; this has been used to treat missionary Dr. Rick Sacra and NBC photographer Ashoka Mukpo. Both men received plasma from missionary Dr. Kent Brantly as part of their treatment and both have recovered from Ebola and been released from the hospital. Nurse Nina Pham, still in the hospital, also received a blood transfusion from Dr. Brantly.

FAQs on ZMapp as an Experimental Treatment for Ebola

ZMapp has not been tested in humans. It needs to go through a controlled, double-blind study to assess its safety and effectiveness. It is a combination of two older products, genetic product taken from mice and humanized and tobacco, which is used to grow the vaccine before it is sterilized.
1

How Effective Is ZMapp as a Treatment?

Since ZMapp hasn’t gone through Phase 1 trials yet, it is impossible to tell whether or not it is effective. The few people it has been given to do not make a large enough sample and there is no control group against which to compare them. It may be that the supportive care they received (IV fluids and electrolytes; maintenance of oxygen saturation and blood pressure while treating co-morbid infections) caused them to recover; there simply is no way to know in this current outbreak.

Is ZMapp a Therapy or a Vaccination?

They are two different things. A vaccine, vaccination or immunization is given before one gets sick or exposed to the illness in question, as administering afterward provides no protection. ZMapp is a therapy or treatment, given after someone has already contracted the Ebola virus.  GlaxoSmithKline and several other entities are developing vaccines at this time, but none of them is ready for the market.

Why Isn’t Everyone Receiving ZMapp?

Very few treatment courses were produced in the first place. Those that were have been administered to patients in the current outbreak. It takes months to produce because of all of the steps necessary and the different species involved in its manufacture.

Will the FDA Make ZMapp Available Under Its ‘Access to Investigational Drugs’ Rule?

The FDA does possess the authority to allow access to promising pharmaceuticals through its Investigational New Drug (IND) program. For this to happen, the company must submit a request to the FDA, who must then authorize it. The FDA is not permitted to comment publicly on specific submissions to their IND program.

What Branches of Government Were Involved in Developing ZMapp?

The U.S. government supported the research and development which led to ZMapp. The entities included may surprise you: Health and Human Services’ Biomedical Advanced Research and Development Authority (BARDA); Department of Defense’s Defense Threat Reduction Agency (DTRA) and National Institute of Health’s (NIH) National Institute of Allergy and Infectious Diseases (NIAID). DTRA, NIH and NIAID are all collaborating with companies, besides the one that owns the rights to ZMApp, to develop other treatments, as well as vaccines.

Treatment for Ebola-- Inside An Ebola Treatment Center from NBC News: