I have compiled a list of my favorite reverse harem anime series for you. They are considered the best of the best in my opinion. I highly recommend all of them. 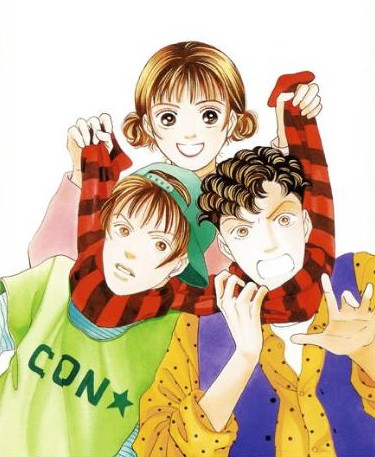 Tsukushi Makino comes from a poor and humble family; however she attends the Eitoku Academy (Eitoku Gakuen) which is a school for children from wealthy families. The school is ruled by the F4 group, which is a group of handsome schoolboys, who intimidate the student population. However, a coincidental encounter makes Tsukushi stand up for herself against Tsukasa Domyoji who is the F4 leader and son of the richest and most influential family in Japan. In a strange twist to the story, Tsukasa ends up falling in love with Tsukushi.

On the other hand, Tsukushi is interested in the more calm and mysterious, Rui Hanazawa who is Tsukasa’s best friend and also a member of F4. Nevertheless Rui harbors affections for his first love since childhood, the model Shizuka Todo. Shizuka eventually leaves and Tsukushi encourages Rui to follow Shizuka. In the absence of Rui, Tsukasa and Tsukushi begin to grow closer, however because of the difference in their family background, Tsukushi and Tsukasa's relationship encounters fierce opposition from Tsukasa's mother, Kaede who then tries to break them up by all means…

The father of Yui Komori moves abroad, he sends her to live in a town that is new to her with the Sakamaki brothers who she discovers are vampires. They exploit her psychologically and physically, often feeding off her blood. With time she unravels mysteries of the Sakamakis' past and also her own. She ends up sharing her living space with six handsome men who are not human. Though her new housemates are brothers, and their fascination with her is based on her bloodline, they do not act “brotherly”. Yui ends up undergoing the most dreadful and draining experience any adolescent girl could imagine…

Haruka Nanami enrolls in the Saotome Academy which is a prominent performing arts school, with the dream of becoming a composer and someday writing a song for her favorite idol. If successful, she will become a member of the Shining Agency after graduation. The academy itself is an amazing place where anything could happen, however romance is firmly forbidden at the school. At the graduation, two students are to be paired up; one will assume the role of the idol and the other the composer. They will perform a song that was both composed and written by them. If successful, they will join the Shining Agency as the new debutant artists…

After her dad remarries, Ema Hinata (later changed to Ema Asahina) moves into the Asahina Family house and discovers that she has 13 step-brothers. Ema’s intentions were to live harmoniously with them as a family; however the sudden entrance of a girl in an all-male family causes a disturbance. As they go on with their lives, the brothers’ feelings towards her start to change and could prove to be the beginning of a romance or close friendships…

Ouran High School is a prestigious school catering to the wealthy, high-society families. Haruhi Fujioka is a middle-class scholarship scholar, a rare case in such a school. She stumbles upon an unused music room while looking for a tranquil place to study, which eventually turns out to be the club room for the school's Host Club which is a group of lazy rich boys, with exceptional good-looks, who amuse female clients.

After unintentionally knocking over a priceless Renaissance vase worth far more than she can possibly reimburse, she is obligated to join the Host Club as an "errand boy" in order to work off her dues. Soon after, Haruhi demonstrates that she is a "natural" host and is promoted to be a Host of the Ouran Host Club. Haruhi's short hair, drooping apparel and face cause her to be erroneously pegged by the hosts for a male student. However members of the club discover her true gender and decide to keep it a secret...

The heroine of the story wakes up on the morning of August 1 and realizes she has absolutely no memories of her past. A boy appears before her, and introduces himself as a "spirit" called Orion. The story is about the heroine struggling to regain her memories with the help of Orion. She gets a phone call, however she does not recognize the name displayed on her mobile phone screen. She then meets her so-called "boyfriend," in spite of not knowing how he looks…

The anime series describes the adventures of Yuki Miaka and Hongo Yui, who are middle-school scholars. One day while in the library, Miaka and Yui happen to find a strange book. Reading the book transports them into the universe of the novel in ancient China. Yui gets transported back to the real world dimension almost instantly, however Miaka finds herself being the Priestess of Suzaku. Miaka is fated to collect the seven Celestial Warriors of the god Suzaku so as to summon Suzaku and gain three wishes.

She eventually falls in love with Tamahome a celestial warrior, who reciprocates her love. Miaka's aspiration of using a wish to gain access to the high school of her choosing shifts to getting a way of being with Tamahome. Yui on the other hand is drawn to the book while attempting to assist Miaka to come back to the real world dimension; hence she becomes the Priestess of Seiryuu, eventually working against Miaka based on jealousy over Tamahome and vengeance for the dishonor and agony she endured when she first entered into the book's world.

The story is about the restoration of Yona, who is the only princess to the kingdom of Kouka. In the beginning of the anime, Yona is living a carefree life of a princess in Hiryuu castle, where she is sheltered by her pacifist father, King II, and guarded by her bodyguard and childhood friend Son Hak. During her sixteenth birthday party, her other childhood friend and love interest Soo-won comes to pay respect to her.

Later, she visits King II's chambers and witnesses him being murdered by Soo-won. Hak intrudes and saves Yona and they escape from the castle to the birthplace of Hak, the Village of the Wind. Oracle Ik-su then tells them the legend of the first king of Kouka, Hiryuu, and the four dragons who united the kingdom. Accompanied by Ik-su's subordinate Yun, they start a journey to find the reawakened legendary dragons so as to survive and restore the Kingdom of Kouka.