Son: “Why are you leaving us and the home unprotected?”

In the above conversation, the child would be considered to be making a straw man argument if the mother’s refusal to get a dog has nothing to do with protection but other factors. The mother might have thought of other means to protect the family and home, hence the refusal to get the dog does not mean she does not want to protect the family. Interesting? This is the trick of straw man argument. 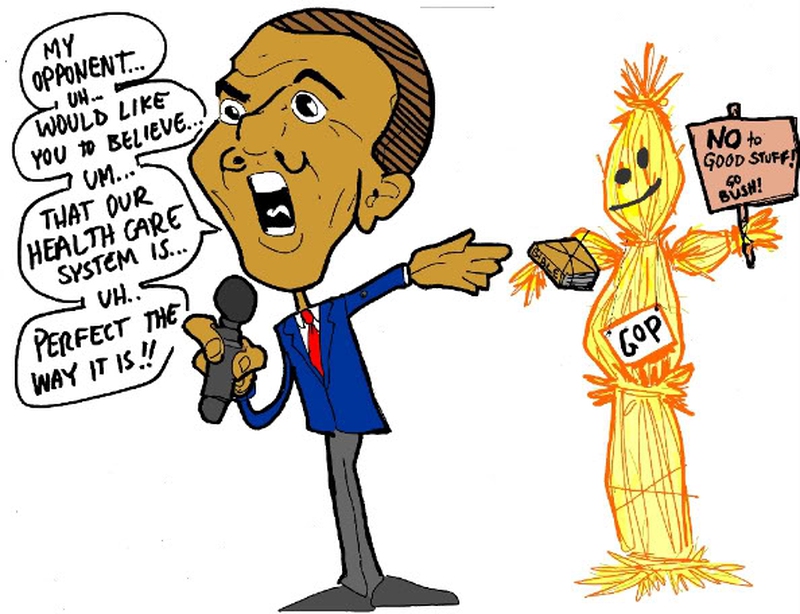 What Is a Straw Man Argument?

Straw man argument, also known as straw dog or scarecrow, is derived from military because in the military scarecrows are used for practice of baffling enemy. It is a tactic or measure to win your argument, because it makes use of deliberate misrepresentation of the opposing side’s argument. This misrepresentation is done by quoting them out of context, excluding key points from the argument or holding one point of weak defense and representing it as the entire defense argument. This type of reasoning can be clearly explained in the following pattern:

1. Person X has position A

2. Person Y presents position B ( which actually is a distorted version of A)

3. Person Y then attacks position B

The end result being B becomes incorrect/flawed or false, so person X is wrong and person Y wins.

watch the video below to get clear understanding about straw man argument with interesting animation.

There are various types of logical fallacies like red herring, slippery slope and ad hominem. Like them, the straw man argument can be used in various facets of life: political, business, religious and even personal life. Given below are some straw man argument examples so that you can understand it better.

It happens many times that the person who is making the straw man argument tends to highlight the most extreme points made by the opposing team. For example:

Argument made by opposition: It is important to teach teenagers about contraceptive methods, so they can use them for safe intercourse.

Straw man argument: People who support sex education just want to give the children a license to have sex without facing any consequences.

In this straw man argument, the things which make the issue of sex education complicated are being ignored. This leaves the opposing argument very narrow and of extreme view.

A straw man argument also can highlight the actions of minority made by the opposition argument. For example:

Argument made by opposition: Since cycling is a very viable mode of transportation, bicycle infrastructure should be expanded.

Straw man argument: If bike lanes are built, cyclists get an opportunity to run red lights and endanger pedestrians. Hence, bike lanes should not be built.

This straw man argument is based on the minority cyclists who do not follow traffic rules and completely ignores the positive aspects of having good bicycle infrastructure.

Another trick of straw man argument is over-simplifying the view point made by the opposition, so it becomes easy to negate. For example:

Argument made by opposition: It would be good to have publicly funded healthcare in the US to enable all citizens to have equal access to healthcare which will help them live a full, happy and productive life.

Straw man argument: It is not a good idea to give an entitlement in this age when the government spending runs amok.

Here the rhetoric argument has no substances and ignores the complex issues which surround the publicly funded healthcare.

Here we have a straw man argument example that common happens in our daily life, now you can try to explain this example with all your learnt here.

Mary and Jane are having an argument about cleaning the backyard.

Mary: We have to clean the backyard, it is a mess.

Jane: Why? We cleaned it last month, why do you want us to do it every day?

Mary: I did not say we clean it every day! You want to keep all the garbage piled up forever, which seems so ridiculous.