The platypus is one of the most unlikely animals found in nature. In fact, the first scientist to see a platypus thought it was a hoax. The platypus is an unusual collection of familiar features from other animals. Any list of facts about platypus will describe its unusual appearance, which includes the webbed feet, bill of a duck, the tail of a beaver, and the body and fur of an otter.

In addition to the odd appearance of the duck billed platypus, there are actually many more interesting and unusual facts about this animal. This mammal has an incredibly odd collection of anatomy, habits, and attributes. 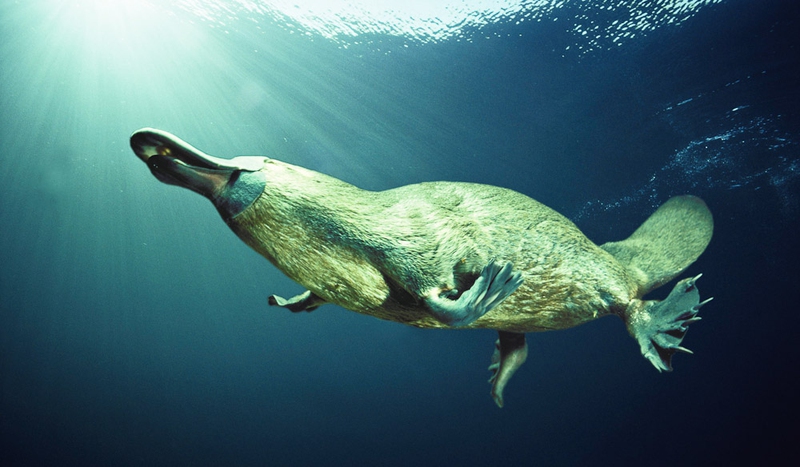 One of the biggest criteria for classifying an animal as a mammal is whether or not it lays eggs. At the top of odd platypus facts, however, is that despite being a mammal, the platypus does lay eggs and is only one of five types of mammals that does this. The other criteria for mammals is that they must be warm blooded and have hair in addition to not laying eggs.

Although it is not the version of the platypus that exists today, one of the most interesting platypus facts is that the animal was once as large as a dog. Today the platypus is comparable in size to a house cat, but the one from 5 or 15 million years ago, living in northern Australia, was actually around bulldog size, three feet in length. Scientists informally refer to this particular animal as "platypus Godzilla" because it looked like the modern version, but much larger.

Mammals, including humans and the platypus, feed their young through lactation. While it is true that the mother platypus does in fact lactate like any other mammal, it does so in a very different way. The platypus can't lactate through its nipples as it doesn't have. Instead, it secretes the milk via pores throughout the skin. Then the milk will pool along special groves found in the abdomen. It is from there that the platypus babies lick up their milk, instead of suckling on nipples.

Since platypus facts make it clear that this animal has a duck bill, it seems very odd that it would need to have teeth at all. In reality, however, platypus babies are actually born with teeth. The teeth do not last very long as they drop out while the mammal is still young. The fact remains that while adult platypuses don't have teeth and haven't shown signs of needing them, they are always born with them.

Most people would expect a water-loving animal like the platypus to be either an omnivore or an herbivore. Between the teeth at birth and the duckbill, it makes sense that the platypus eats at least some meat, but in reality, they are completely carnivorous. This doesn't mean that the platypus eats large animals, or even beings that we would typically think of as animals, but their diet does not include any plants. Instead, the biggest food sources for the platypus are freshwater crayfish, insect larvae, and worms.

Most people have heard of echolocation, which bats use, but not everyone has heard of electrolocation. This is the method of using electric fields to locate objects and "see." One of the interesting platypus facts is that this animal relies on electrolocation to find their prey. They create electric fields via muscle contractions and then work to detect them.

The male platypus has spurs on their hind legs and each of these spurs produces venom, making the platypus a venomous animal. This venom is deadly and can have a fairly significant impact on its victim. Instead of a numbing sort of reaction, it causes excruciating pain and a lack of muscle control. This type of venom can be incredibly useful for protection and hunting, but means that if you see a platypus, you should avoid the spurs on its hind legs.

Back in the early 1900s we were still learning about the platypus, but people were already hunting them to get their fur. Based on their habitat, it makes sense that one of the platypus facts to know is that this animal's coat is thick and waterproof. Unfortunately for the platypus, this meant that their fur was prized by fur traders. Hunters would fire into the water to stun the animals and then have their dogs bring the mammal out. Sometimes the venomous spurs would get the dogs, but hunters continued getting platypus fur for rugs. Eventually the Australian government banned hunting platypuses so the species would remain free from danger.

When most people think of organs that every animal needs, a stomach is right near the top of the list. Oddly enough, the platypus does not have a stomach and does not actually need one either, thanks to its unique evolutionary history. In most animals, the stomach works to break down foods and help with digestion. Platypuses, however, simply have their esophagus and intestines connect. Scientists have examined the animal and are positive that at some point their ancestors did in fact have stomachs. Their theory is that over the years, they got used to their current diet and that simply don't include any food items that need complex digestion. Because of that, platypuses stopped making stomachs.

When you start reading platypus facts from various sources, you can easily become confused in terms of what to call more than one of this animal. The majority of people uses the word "platypuses" for the plural or relies on "platypus" for the singular and plural, and you will find this version in many dictionaries. While this method is the most understood, other people say that the plural should be based on the roots of the word. As the word "platypus" comes from Greek, they argue that its plural should follow the pluralization rules for Greek, in which case it would be "platypodes." This means that you will find several different ways to say the plural for this animal, all of which are technically correct.