The grit and determination of the American pioneers was truly impressive. Those who crossed the country to settle the West, slogged through the muggy South, and fished the seas and wild rivers all had to face formidable obstacles including famine, predators, and what must have been extended periods of sheer boredom.

Without television and movies, entertainment in late 18th- and early 19th-century America was limited to campfire stories and tales told around the fireplace. You can't blame storytellers for embellishing here and there to raise interest levels and inspire tired and weary listeners. The following folk legends helped pioneers cope with uncertainty during hard times and inspired the blind ambition needed to explore the American frontier. 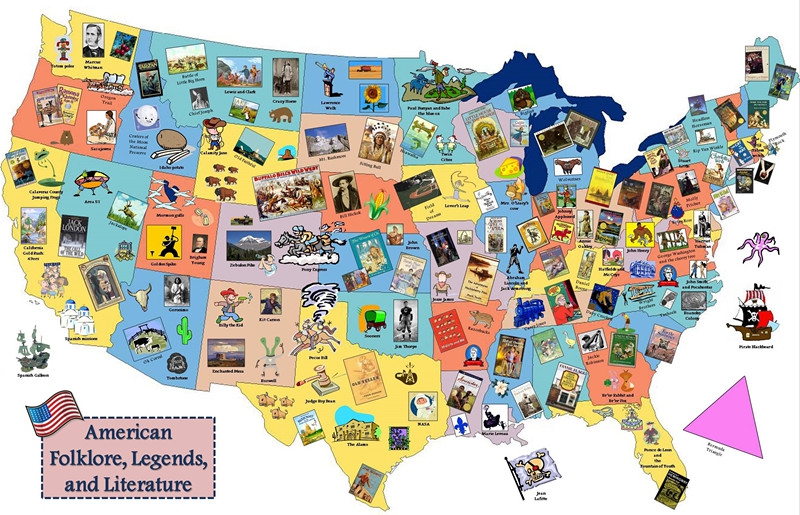 If it weren't for Paul Bunyan, America just wouldn't be as interesting geographically. French-Canadian lumber camp legends about Bunyan, which were later adapted by Americans, claimed that he was delivered to Earth by five giant storks, since he was already dozens of feet tall as a baby. Wherever he went as he got older, he created major landmarks. His footprints created Minnesota's 10,000 lakes; his shovel created the Grand Canyon as it dragged behind him; his use of rocks to extinguish a campfire created Mount Hood. Bunyan was accompanied by his blue ox, Babe, who was almost as big as he was. Statues of Bunyan and Babe have been erected all across the country as a testament to America's love of a tall tale.

Unlike a lot of the tall tales from America's formative years, the story of John Henry is somewhat based in fact. There probably really was a John Henry who was born a slave in the South in the mid-1800s. Legend has it that he was around six feet tall and weighed more than 200 pounds. In those days, that was big enough to guarantee you'd be given exceptionally tough work -- like building railroads or tunnels. If Henry did exist, he likely worked on the Big Bend Tunnel that went through the mountains of West Virginia. From there, the legend has thousands of variations. Some say Henry challenged the tunnel-making machinery to a duel to see who could drive stakes and blast rock faster. Most stories claim that he won, but that he died from exhaustion after the contest. Some say he won and went on swingin' his hammer from coast to coast.

John Henry and Paul Bunyan are huge figures in American folklore. On the next page, find out more about legend favorites Sally Ann Thunder and Johnny Appleseed.

Women in tall tales were few and far between, but there are some who made it into folklore as hard as nails, larger-than-life folks. Sally Ann Thunder is one that emerges, however infrequently, as the wife of Davy Crockett. In reality, Crockett married several times and none of the record books have him married to anyone with Thunder in her name. But stories do exist of a gun-totin', fast-talking lady who helped get Davy out of sticky situations and wouldn't miss a trick. She reportedly wore a real beehive as a hat and enjoyed wrestling alligators in her spare time.

Tales of Mike Fink originated in the 19th century and were based on a real man born near Pittsburgh around 1780. The real Fink sailed keelboats on the Ohio and Mississippi rivers and fought against various tribes of Native Americans. Fink was noted as being an exceptional marksman, though he was reportedly a rather hard-drinking and hard-living character. By many accounts it was Fink who started spreading tall tales about himself, which may explain his low standing among more noble legends like Paul Bunyan and John Henry. Still, tales of Fink being "half-man, half-alligator" and being totally impervious to pain keep him in the canon.

Pecos Bill, one of the most popular American tall tales, was lost while crossing the Pecos River with his parents. He was found by a pack of coyotes and lived among them until he met a cowboy and realized his true calling. No one was better at ranching than Pecos Bill because he had an uncanny ability to convince animals to work for him. Bill married a nice girl named Slue Foot Sue and lived a long life of ranching, herding, and singing by the campfire.

Read on to learn about some of the most well known figures in American folk lore, like Geronimo and Davy Crockett.

Geronimo, an Apache leader from the Arizona area, was captured and forced onto a reservation by the U.S. Army in 1876. The persecuted Apache leader fled to Mexico, but after that, things get murky and exaggerated. The story goes that Geronimo's wrath toward the white man was such that he killed thousands over the years, using magical powers and ESP to seek them out. It's said that it took many thousands of soldiers and scouts to track the warrior down. By the time Geronimo finally surrendered in 1886, his group consisted of only 16 warriors, 12 women, and 6 children. Geronimo and his people were shipped to Florida, then relocated to Alabama and Oklahoma where they were placed in prisons and reservations. Geronimo died a prisoner of war in 1909.

Though stories about Stormalong vary, most place him in Cape Cod as a big baby -- a baby more than 18 feet tall! Stormalong, a gifted sailor, joined the crew of a ship. When the ship had an encounter with a kraken -- a beast from Norse mythology -- Storm-along fought back but didn't kill the sea giant. Eventually, he wound up back on the high seas in search of the kraken that had escaped him. The ship he used was said to have slammed into the coast of Panama, forming the Panama Canal. According to legend, the same boat supposedly got stuck in the English Channel, requiring the crew to slick it up with soap in order to get it out. The soap and the scraping action turned the White Cliffs of Dover white.