Every English teacher aims to teach her or his students proper English by explaining numerous grammar rules and instructions on how to properly use certain words. Reviewing these rules can bring back memories of grade school. Unfortunately, for the English teachers, not all grammar rules are covered. Additionally, much of the English language is not learned through rule, but through daily usage. This can often lead to grammar confusion, such as improper use of the words “good” or “well.” 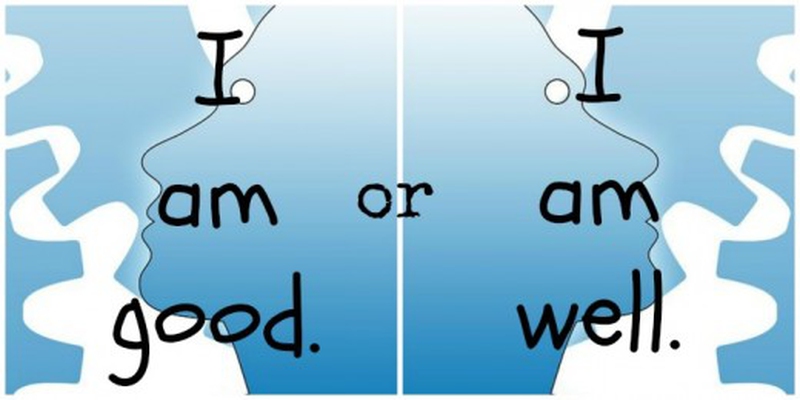 Good vs Well: Why Confusing?

How many times have you been asked, “How are you?” If things are going well, how do you answer? Do you say “I am good,” which is a common answer among native English speakers? Or do you say “I am well,” which is probably not commonly used?

Based on the general grammar rules, only adverbs should modify verbs. Therefore, “well” would be the proper modifier of the verb “am.” Likewise, only adjectives should modify nouns and “good” is an adjective. As a result, sticklers for grammar think “I am good” should be incorrect since an adjective is being use to modify the verb “am” in this sentences. However, the grammar rules aren’t so simple.

Knowing which word to use in the “well” vs “good” debate revolves around an understanding of how action verbs are different from linking verbs. As the name implies, an action verb represents an action, and it is only an action verb that should be modified by an adverb. For example, the following phrase is proper English: “He climbs well.” It would be improper to say “He climbs good,” because an adjective cannot be used to modify an action verb.

And coming full circle to our original example, “I am good,” the word “good” is modifying the noun “I,” not the linking verb, “am.”

Good vs Well: How to Use Them Correctly

The word “good” is an adjective, which is a word that modifies a noun. Here are three examples:

In these examples, "good" is modifying the nouns, “cake,” “story” and “game.” But recall the above discussion of how “good” can follow a linking verb as long as it is still modifying a noun. For example:

The word “well” is an adverb, which is a word that modifies verbs, adjectives and other adverbs. Here are three examples:

Good vs Well: Use Them Correctly as an Adjective