Perhaps you are a huge fan of French songs, or you just love listening to music. Whatever the case is, you will find a great list of the most well-known French songs in this article as well as why they have stood for such a long time. 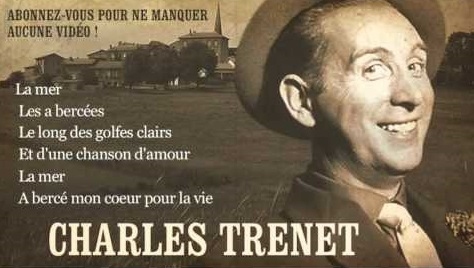 Here's coming our first famous French song: La Mer. Performed by French singer/songwriter Charles Trent who wrote his own lyrics, this song was supposedly written in just ten minutes and recorded in 1946. The title translates to “the sea” and is about the beauty of the ocean. There have been more than 400 recorded versions of this song, including “Beyond the Sea” by Bobby Darin.

Performed by French singer and international star Edith Piaf, it became popular in 1946 with an official release in 1947. The song, written by the singer herself, is about refound love, becoming especially meaningful for those who suffered during the war. In 1998, it won a Grammy Hall of Fame Award. You can tell how famous it is by having heard it in hundreds of films and so many artists have covered it.

This song was performed by Yves Montand, a singer and actor from Italy who later became a French citizen. It was recorded in 1951 for the film of the same title which was written by Hubert Giraud and Jean Drejac. The song is about falling in love in Paris. It has also been recorded by Edith Piaf, the Three Tenors, Mireille Mathieu and Juliette Greco.

Performed by Belgian singer/songwriter Jacques Brel, this song was recorded in 1959 and released on the album “La Valse a Mille Temps” and again in 1972 on the album of the same name. Brel wrote the song after his long-time mistress Suzanne Gabriello left him. It is critically acclaimed and considered to be his ultimate classic.

When you are talking about famous French songs, Edith Piaf cannot be forgotten. Non, Je Ne Regrette Rien is a famous chanson performed by her, the internationally renowned French singer. It was written by Charles Dumont and Michel Vaucaire in 1956 and recorded in 1960. At the time of the release, France was involved in the Algerian War (1954-1962) and Piaf dedicated it to the French Foreign Legion. It has been covered by such artists as Shirley Bassey, Emmylou Harris and Elaine Paige.

This was performed by French singer Monique Andree Serf, taking the stage name Barbara from her Russian grandmother. It appeared on the album of the same name in 1961. It is a sad and somber song that some believe it is about child abuse. Probably Barbara’s biggest hit, the song sold one million copies in just twelve hours.

The song was performed by Francoise Hardy, a popular singer who co-wrote the song with Roger Samyn. It was released in 1962 and quickly became popular after being played on television. It is about a young girl who has never been in love and is jealous of the couples she sees together. It has been covered by many artists. It has also been quoted in the novel What Heddy Did (1988) by J.L. Carr.

This song was performed by Jacques Brel, a Belgian singer/songwriter. The only version Brel recorded was on a live album “Enregistrement Public a l’Olympia 1964”, but still, it was one of his most popular songs. The song is a poetic account of sailors on shore leave in Amsterdam. It has been covered by many artists over the years, including David Bowie and the Dresden Dolls.

This song was performed by Georges Brassens, a French poet, singer/songwriter. It was written by Brassens and recorded in 1964 for the film “Les Copains” by Yves Robert. The song is about friendship and a boat of the same name. It is considered to be one of his most famous songs and has been covered and translated by the band Asleep at the Wheel as “Friendship First”.

Among all famous French songs, this one shouldn't be missed. It was performed by Armenian-French singer/songwriter Charles Aznavour (1924- ), who co-wrote it with Jaqcues Plante. It was recorded in 1965 and became an international hit in 1966. It is about a painter reflecting on his life as a struggling but happy artist in Montmartre. Aznavour re-recorded his song in many languages. It has been covered a few times, most recently by Portuguese artist Mafalda Arnauth in 2005.

This song was performed by Joseph “Joe” Dassin, a Jewish-French singer and songwriter born in America. It was originally recorded in 1976 on the album “Le Jardin du Luxembourg”. It is a love song recounting the relationship of a couple still together. During his long career, Dassin has sold fifty million albums around the world.

Here comes another famous French song, which is also one of my favorites: Elisa. Written and performed by Serge Gainsbourg, a French singer/songwriter and artist, it was released in 1969 on the album “Jane Birkin/Serge Gainsbourg” which features duets and solo performances. It is a weird telling of a salacious affair between a man and his much younger lover. The album was reissued on August 4, 2010 for the first time in the United States.

Performed by Joseph “Joe” Dassin, a Jewish-French singer and songwriter born in America, it was originally recorded in 1975. It translates to “If You Didn’t Exist” and is a love song about how empty a man’s life would be without his love. Dassin recorded approximately 250 songs over his long career.

Performed by Joseph “Joe” Dassin, "A’Toi" was originally recorded in 1976 on his album “Le Jardin du Luxembourg”. It is a love song recounting the relationship of a couple still together. During his long career, Dassin has sold fifty million albums around the world.

Le Sud, performed by Nino Ferrer, a French singer/songwriter born in Italy, is completing our list of famous French songs. It was recorded and released in 1997 on the live album “Concert chez Harry.” The title translates to “the south” and is about New Caledonia where Ferrer spent a great deal of his childhood.