Introduction
What’s Ebola Virus’s Mode of Transmission?
1 Transmission Is Made Through Direct Contact
2 The Virus Can Still Be Transmitted Even Though the Person Is Dead
FAQs on Ebola Virus Transmission
1 What Exactly Does “Direct Contact” Mean?
2 What Are Body Fluids?
3 Can Ebola Be Spread by a Cough or Sneeze?
4 Once Outside the Body, How Long Does the Ebola Virus Live?
5 If a Patient Recovers from Ebola, Can They Get It Again? Are They Cured for Life? Can They Get a Different Strain of the Ebola Virus?
6 Those Who Recover and Survive Ebola, Are they Still Contagious with The Virus?
7 Can Mosquitoes Carry the Ebola Virus to Humans?
8 Can a Toilet Seat Carry the Ebola Virus?
9 Can Ebola Be Sexually Transmitted?
10 Can Ebola Be Caught from a Taxi, If a Person Were to Take The Taxi After The Infected Was in It?
11 Can Ebola Be Caught from Touching Door Handles?
12 What Is Done in Public Places Such As Schools and Railroad Stations to Prevent the Virus from Contaminating More People?
13 Will the Ebola Virus Become Airborne?
How to Protect Yourself from Ebola Infection
Point 1

The World Health Organization (WHO) describes the Ebola Virus Disease as an illness in humans that is severe, and often fatal. The Ebola virus takes its names from its first documented location in a village that was near the Ebola River. The first documented case appeared in two outbreaks located in Nzara, Sudan and Yambuku, the Democratic Republic of Congo. Most locations that are afflicted with the Ebola virus are located in Central and West Africa. When an Ebola outbreak happens, it can have a 90% death rate among those who are afflicted. With the current outbreak, the mortality rate is at 70%. Read on to learn how ebola virus transmits and how to avoid ebola virus transmission. 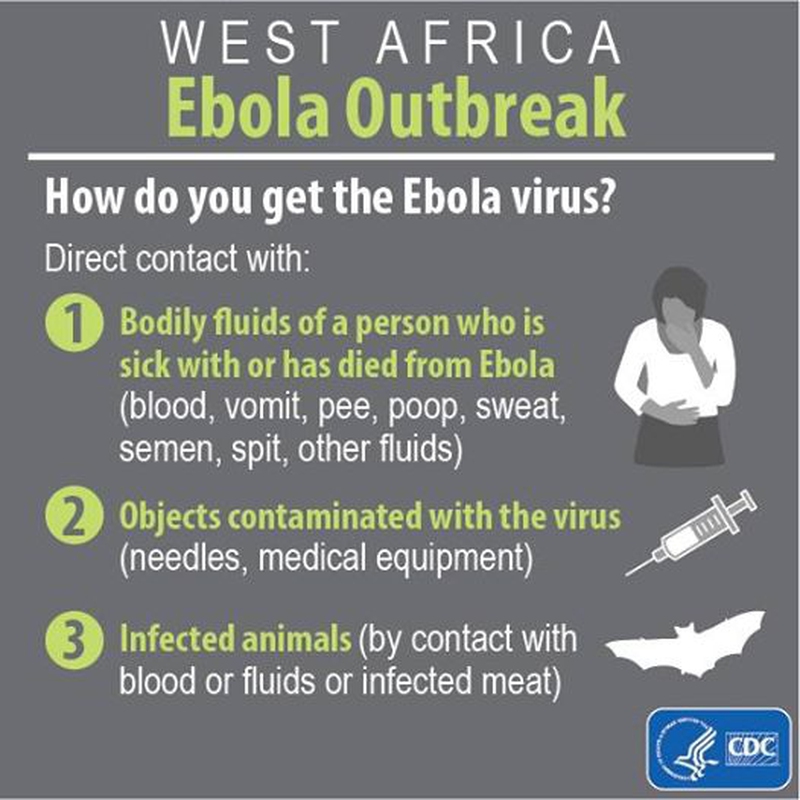 The Ebola Virus has many modes in which it can be transmitted. However, fruit bats are thought to be a natural Ebola virus host. However, the virus can also be found in other animals such as chimpanzees, monkeys, gorillas, porcupines, and forest antelope. It is usually through the organs, bodily fluids, secretions or blood of these types of infected animals that the virus is spread to humans. Many times these animals are found dead or ill, and humans come into contact with them in these types of situations.
1

For the Ebola Virus to spread from one human to another, it requires direct contact with someone who is infected. This means through the blood, organs, human secretions, or bodily fluids of an infected person coming into contact with a cut or abrasion of the skin or the mucous membranes of a well person. An infected person can also pass along the virus via surfaces or materials such as their personal bedding or clothing that have these fluids contained on them.

Due to the human to human contact in the medical field, many healthcare workers are often contaminated while on the job. Many times this has happened, and it is due to the medical staff not taking proper precautions when dealing with an infection of this status.

There are often times in which the Ebola Virus is spread during burial ceremonies. Those who attend the burial service and have contact with the body can become contaminated with the virus, even though the person has died.

How is Ebola transmitted from CBS News:

Direct contact refers to the bodily fluid, whether this is semen, breast milk, saliva, mucus, tears, sweat, urine, feces and/or vomit, from an infected person going into a person’s mouth, eyes, nose or an open spot on their body.

What Are Body Fluids?

The Ebola Virus is spread through contact with bodily fluids and through the blood of an infected person. Bodily fluids include semen, breast milk, saliva, sweat, mucus, tears, urine, feces, and vomit. Any of these fluids can contain the virus, and when in contact with an open sore in the skin or through the mucus membranes, a person can become infected.

Can Ebola Be Spread by a Cough or Sneeze?

The Ebola Virus is not like other viruses which can remain active in airborne particles, such as the spit or mucus that may be accompanied by a sneeze or cough. Thus, coming into contact with the Ebola virus by airborne particles that were sneezed or coughed by an infected patient has a very low chance of actually infecting a person. However, if a person who were infected by the Ebola virus were to cough or sneeze directly at you, in which the mucus or saliva gets into your mouth, up your nose, or in an eye, then you could become infected with the virus. It takes direct contact to become infected with the virus, meaning that the bodily fluid has to enter your body in some method.

Once Outside the Body, How Long Does the Ebola Virus Live?

If a Patient Recovers from Ebola, Can They Get It Again? Are They Cured for Life? Can They Get a Different Strain of the Ebola Virus?

Once a person has been declared as recovered, their bodies have produced antibodies that remain in the body for at least 10 years. Whether a person recovers from the Ebola virus or not depends upon their immune system and the health care that they are receiving. As to whether they are cured for life, it is not known. Nor is it known if the person is cured from every other strand of Ebola virus that is out there.

Those Who Recover and Survive Ebola, Are they Still Contagious with The Virus?

When a woman has recovered and survived Ebola, she is no longer contagious. However, a man who has recovered and survived the Ebola virus can still spread the virus via his semen. It has been discovered that the virus can still live in the semen for up to 3 months after a man has been declared recovered. Men should abstain from sex for 3 months or longer after recovery. If abstinence is not working, then the use of condoms could help to prevent the spread of the virus.

Can Mosquitoes Carry the Ebola Virus to Humans?

At this time, there is no evidence that shows mosquitoes can carry this virus to humans. The only non-humans that can carry the Ebola virus are other mammals like apes and monkeys. Fruit bats can also carry the virus.

Can a Toilet Seat Carry the Ebola Virus?

A toilet seat can carry the Ebola virus only if there is feces or urine on the toilet seat that is contaminated by someone who has serious vomiting or diarrhea. In most cases, this type of Ebola virus transmission is only going to occur in a hospital setting in which there are Ebola patients, or in a private home of someone has the virus. In most cases, the chances of catching the virus from a public restroom are very unlikely.

Can Ebola Be Sexually Transmitted?

Most definitely as semen is a bodily fluid. In fact, semen can hold onto the virus for up to 90 days after the person has recovered from the virus.

Can Ebola Be Caught from a Taxi, If a Person Were to Take The Taxi After The Infected Was in It?

Ebola can live on hard surfaces for a small period of time. If you were to get into a taxi that an infected person had just rode in and there was blood or other bodily fluids on the seats, and you were to have an open wound on your body or touch your face, then you could possibly catch the Ebola virus. However, in the US and in Europe, immense tactics are used to track down the movements of patients who are diagnosed with the virus in order to ensure that everything is decontaminated before the public is put into harm’s way.

Can Ebola Be Caught from Touching Door Handles?

If touching a handle in which blood or a bodily fluid is on, and then touching your face or having an open wound on you that comes into contact with the fluid, you can catch the virus in this manner. However, this is usually only going to happen in hospitals or private homes that an infected person is staying. In most cases, those who touch door knobs who follow safe hand washing practices are safe.

What Is Done in Public Places Such As Schools and Railroad Stations to Prevent the Virus from Contaminating More People?

There are strict guidelines in many parts of the world to prevent any types of bodily fluids or blood remaining in these areas. In most cases, cleanup crews are brought in to remove these fluids to prevent the spread of disease and illness. Bathrooms in these public types of places are cleaned with bleaches and other harsh chemicals to remove any traces of viruses or illnesses to ensure these are safe for public use.

Will the Ebola Virus Become Airborne?

This is a high worry on the minds of many people in the world, and those in the scientific community. For the most part, the chances of the Ebola virus becoming airborne is highly unlikely as there has been no sign that any virus can change its mode of transmission in such a manner. However, the scientific world points out that this cannot be completely ruled out, as viruses do manipulate and change constantly, as can be seen with the Ebola virus.

How to Protect Yourself from Ebola Infection

Protecting yourself from Ebola is best done by not traveling to areas in which the Ebola virus is on the rise. The CDC often issues warnings for areas that people should avoid in order to try to contain the virus in one area rather than having it spread. For example, currently the CDC recommends no travel to Guinea, Liberia or Sierra Leone, as it is marked as a level 3. Nigeria is considered a level 1 currently, meaning people need to watch for the virus, but traveling here is fine. While the Democratic Republic of the Congo is at a level 2 as there are some reported cases of Ebola.

When traveling to any area that is known for Ebola, or when simply wanting to ensure that you are protected against Ebola, there are several things in which a person can do to avoid ebola virus transmission and infection: