Introduction
Ebola Fact Sheet— 10 Essential Ebola Facts
1 Basics About the Current Outbreak
2 The 2014 Ebola Outbreak in West Africa Is The Most Intense in History
3 An RNA Virus Which Is First Found in Animals Causes Ebola Virus Disease
4 Experts Are Experimenting on Medications for Ebola Virus Disease
5 There Is No Vaccine Against Ebola
6 General Public in the U.S. Are Not at Great Risk
7 Early Symptoms of Ebola Resemble Those in Viral Infection
8 Transmission Is Only Possible Via Direct Contact
9 You Can Do Many Things to Protect Yourself from Ebola
10 Symptoms of Ebola Can Be Managed By Supportive Care
Misunderstanding of Ebola
Point 1
Point 2
Point 3

“Ebola, or Ebola virus disease (EVD), which was formerly known as Ebola hemorrhagic fever, is a severe, often fatal illness in humans. The average Ebola virus disease case fatality rate is about fifty percent. Fatality rates for cases of Ebola have ranged from 25% to 90% in former outbreaks. The first outbreaks of Ebola virus disease occurred in remote villages of central Africa, those found near tropical rainforests. The most recent outbreaks in west Africa involved major urban areas, as well as rural areas. As of late, the United States has had six confirmed cases of EVD: three people who came in contact with the disease while working to combat it in Liberia; one man who had travelled to Africa; two Texas nurses who had provided healthcare to that man. There are four specialized isolation units throughout the United States: one at Emory University, one in Nebraska; one in Montana and one in Maryland, where most of these patients have received care. Listed below are 10 ebola facts that'll help clear some misconceptions or fictions about ebola. 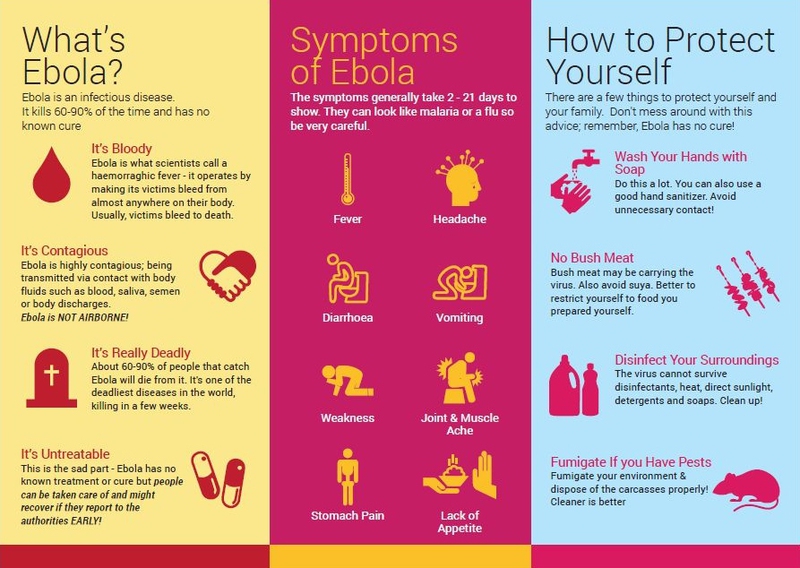 Basics About the Current Outbreak

Because this outbreak is the largest ever documented, with more than 4,000 already deceased, people are scared. Adding to this fear is the fact that because it is a hemorrhagic fever, it is easy to come in contact with an infected person’s blood in the late stages, thus contracting the disease.

Scientists speculate that the virus was transmitted from animals to humans via contact with wild animal blood or other bodily fluids. Animals which carry this RNA virus include fruit bats, monkeys, chimpanzees and gorillas. The World Health Organization (WHO) traces the origins of Ebola in people to the late seventies, on the Ebola River (hence the name) in the Congo and also in the Sudan. Larger outbreaks of Ebola also occurred at that time in Uganda.

Experts Are Experimenting on Medications for Ebola Virus Disease

Although the United States Food and Drug Administration has not yet approved Ebola treatments, an experimental drug was used on Dr. Kent Brantly and Nancy Writebol, the two humanitarian workers infected with Ebola while serving in Liberia. The drug, manufactured by Mapp Biopharmaceutical Incorporated, is named ZMapp and is based on using antibodies.

There Is No Vaccine Against Ebola

The National Institutes of Health (NIH) which has one of the isolation units equipped to treat Ebola victims is researching and developing vaccines in apes. However, this type of virus is very difficult against which to vaccinate. Also, animal rights activists object to the use of apes in this type of research because ape populations are on the decline. But there are too few human volunteers to make a human study feasible. New vaccines, nonetheless, are being tested for safety in people.

General Public in the U.S. Are Not at Great Risk

Unless one comes into contact with an infected person’s blood, mucus, tears, semen, urine, etc., they are not at risk of developing Ebola. Infections are transmitted normally via contact with the blood of a late-stage infected patient, via needle, spill or accidental transmission. The later stages are when the viral load is at its highest. The Centers for Disease Control (CDC) is now reacting to the Ebola outbreak by beefing up their capacity to test, survey and disseminate infection control information to healthcare workers. The CDC is in the process of training first responders, airline crews and other airport employees so that they will be empowered to report sick people attempting to board a plane and isolate them, if necessary.

Early Symptoms of Ebola Resemble Those in Viral Infection

As one can see, these symptoms could easily be confused with another common virus or illness in the early stages. As the disease progresses, however, it becomes apparent that it is Ebola Virus Disease. Patients are encouraged to see their healthcare providers early when treatment can be most effective.

It is impossible to catch Ebola from sharing air with an infected person. It is not transmitted through water or food. In Africa, handling wild animal meat and contact with infected bats have not been ruled out as possible paths of transmission. But insects cannot transmit Ebola. The paths of transmission, as stated above are: blood and bodily fluids: urine, saliva, tears, sweat, feces, vomit, breast milk, semen, etc. and handling needles and syringes (medical equipment which enters the body of the infected patient) which have been in contact with infected fluids.

Healthcare professionals and family members are the populations at greatest risk because they naturally come into contact with bodily fluids of the infected patient during the course of their day. Due to the nature of Ebola, either dedicated or disposable medical equipment should be employed. Once a patient recovers from Ebola, they must abstain from all types of sexual encounters or use a condom for a period of three months because the virus can still be transmitted through semen.

You Can Do Many Things to Protect Yourself from Ebola

●     Avoid contact of blood and body fluids of ill people

●     Avoid touching someone who has died from Ebola

●     Avoid touching bats, primates or blood and fluids from either

●     Avoid touching or eating raw meat from bats and primates

●     If you develop a fever, headache, vomiting, muscle pain, diarrhea, stomach ache or unexplained bruising, seek medical attention at once

●     Travel only to the healthcare facility

Symptoms of Ebola Can Be Managed By Supportive Care

Early intervention is the key to recovery from Ebola, which is why it is so important that the patient seek treatment as soon as they feel ill or suspect that they are infected with the virus. Early intervention includes intravenous (IV) fluids, monitoring electrolytes (body salts) and administering them via IV to establish normal levels. It is also important to keep oxygen saturation levels at optimum volume. Blood pressure must be monitored so it neither falls too low nor rises too high. If another infection concurrently occurs, it must be treated.

Besides know the above mentioned ebola facts, it's also important to clear some myths which are not true.

1. Only the expensive hand sanitizers kill the virus

Actually, washing with normal soap (with alcohol in it) and water is just as effective, according to physicians.

2. It is not possible to contract Ebola from a dead person

When someone dies, the virus remains active in his/her body.

3. The virus that causes Ebola is airborne

It is only spread through bodily fluids.

4. If you and your immune system are healthy, you won’t get Ebola

Anyone can succumb to Ebola because the virus is so potent.

5.  Workers in the healthcare industry brought Ebola to the countries where infections are now found

Actually, hands-on contact with wild animals is thought to be the root cause of the current outbreak.

7. Ebola can be cured by a fast

Fasting will make Ebola worse; one’s body will become weaker more quickly at a time when it requires all of its resources to combat the virus. Fasting only leaves the body resources enough to perform normal body functions.

This was confined to one region. Some regions had a mortality rate as low as 25 percent. The average fatality rate per outbreak is less than 90 percent.

“If a ‘massive’ worldwide response is put in place, the United Nations (U.N.) states that it believes Ebola could be defeated within a period of six to nine months in west Africa.”