Introduction
What Causes Ebola Virus Disease Outbreaks?
Point 1
2 Transmission from Animals to Humans
3 Transmission Between Humans
Who Are at Higher Risks for Ebola?
Point 1
What Should Be Done to Reduce Risks of Ebola Infection?
1 For Common People
2 For Healthcare Workers

The first cases of the current outbreak in West Africa were in March 2014, and it is currently the most complex outbreak that has been seen since the virus was first diagnosed. There have been more people to get this virus and die from it during this outbreak, than there has been in all outbreaks combined. It is also an outbreak that has spread more rapidly from Guinea to Sierra Leone and Liberia, and then to Nigeria by an air traveler, and to Senegal. This article explains in detail ebola causes and how it is transmitted. 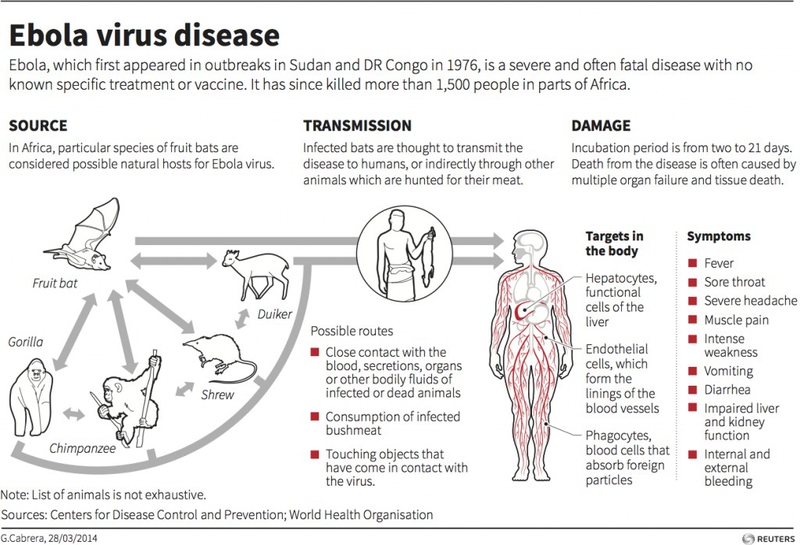 The Ebola virus belongs to the viral family Filoviridae. Scientists also call it Filovirus. These virus types cause hemorrhagic fever or profuse bleeding inside and outside the body accompanied by a very high fever. Ebola can be further divided into subtypes that are named for the location they were identified in. These sub types include:

- Reston (does not cause Ebola virus disease)

Transmission from Animals to Humans

The Ebola virus likely originated in African fruit bats. The virus is known as a "zoonotic" virus because it can be transmitted to humans from animals. Humans can also transfer the virus to each other. Other animals known to transmit the virus include:

Since people may handle these infected animals, the virus can be transmitted via the animal's blood and bodily fluids. Once people become infected with Ebola, they can transmit it to others, if a person were to come in contact with their:

- Semen (which can have the virus in it for up to 3 months after recovery, according to the CDC)

This is the only cause of Ebola transmission. These bodily fluids can all carry Ebola virus. People can get Ebola when they come in contact with these fluids via the eyes, nose, mouth, or broken skin. Healthcare workers are especially at risk for experiencing Ebola because they often deal with blood and bodily fluids.

Ebola can also be spread through sticks from infected objects, such as needles, and interactions with infected animals. To date, Ebola is only known to be transmitted from infected mammals and humans. Insects like mosquitoes are not linked with carrying Ebola.

Who Are at Higher Risks for Ebola?

If a person takes the proper precautions in dealing with Ebola, then they are not likely to simply catch the virus by going into areas in which the virus may be. Furthermore, the virus is not airborne, thus just being near someone does not necessarily mean that a person is at a higher risk of getting the Ebola Virus.

Those who are most at risk are those who are caring for Ebola virus patients. For example, healthcare workers. In fact, health care workers are considered those who are at a higher risk of getting the virus due to having to deal with more bodily fluids and blood than a person who may just visit a country. In the current outbreak, 184 healthcare workers in Liberia have become infected and nearly half of those who have been infected have died. The same type of risk is there for those who may be carrying for a family member who has the Ebola virus.

What Should Be Done to Reduce Risks of Ebola Infection?

There are several things that common people and healthcare workers can do in order to ensure that they are not putting themselves at a higher risk of contracting the Ebola virus, by avoiding Ebola causes and by protecting themselves from transmission:
1