Introduction
How to Use Due To Correctly
Point 1
2 Due to or Because of?
Other Conditions to Use Due To
Point 1

There are several ways to describe a cause and effect relationship in the English language, include using the words “since,” “due to,” “because,” because of,” “result of,” “caused by”, etc. So, what are the differences of these phrases and how to use each phrase correctly? Here we will specifically discuss the “due to” grammar rules and how to use it correctly. 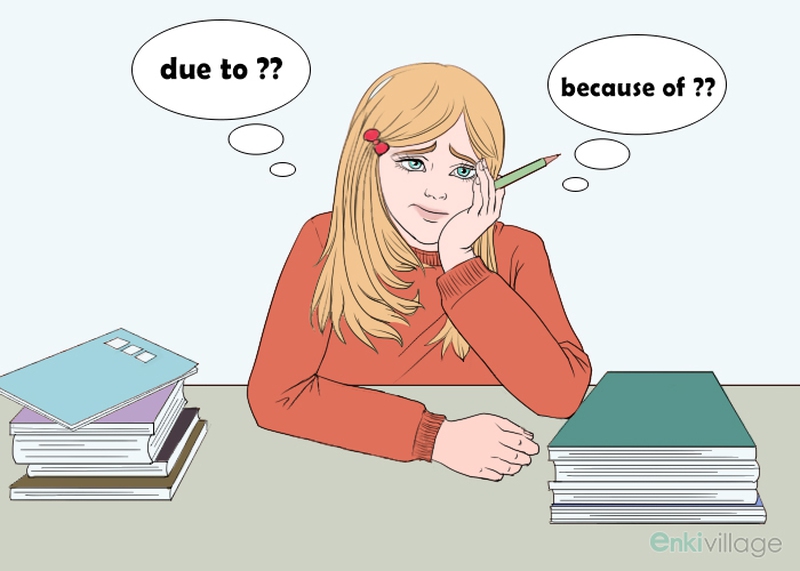 How to Use Due To Correctly

Before getting to know grammar rules of “due to”, we must first know what kind of speech it is. “Due to” is an adjective and modifies a noun, pronoun or noun phrase. Therefore, according to the grammar rules, “due to” can only be used to modify nouns, pronouns and noun phrases. Below are three examples of using “due to.”

1. The road closure was due to an accident.

2. The voting period extension was due to malfunctioning voting machines.

3. The broken basket was due to carrying too many eggs.

One easy shortcut to knowing the proper “due to” grammar usage is to substitute it with the words “caused by.” If “due to” cannot be substituted by “caused by,” then “due to” is being improperly used. For example:

1. The wet blanket was due to the sprinkler turning on.

=The wet blanket was caused by the sprinkler turning on.

2. The good grade was due to extra studying.

=The good grade was caused by extra studying.

3. The lost battle was due to interference by the king in pre-battle planning.

=The lost battle was caused by interference by the king in pre-battle planning.

Due to or Because of?

Based on this shortcut, “due to” is being properly used if “caused by” can be properly substituted. Now, let's see one more example:

1. The game was lost due to bad officiating.

---The game was lost caused by bad officiating.

The substitution of “caused by” does not work here. Therefore, “due to” should not be used. The correct sentence would be:

---The game was lost because of bad officiating.

This begs the question, do “due to” and “because of” mean different things? The answer is that “because of” modifies an entire clause. The use of “because of” requires a situation where a reason is given for a given action in a clause. As a result, neither “due to” nor “because of” are interchangeable with each other. Let’s look at three examples:

1. The clock was unreliable because of the drastic temperature changes in the room.

Explain: “Due to” will not work here, because it can only modify a noun. Here, it is trying to modify the clause “clock was unreliable.” Had the sentence began with “the unreliable clock,” “due to” could be used since it would be modifying the noun “clock,” rather than an entire clause.

2. The game was lost because of poor play-calling by the coach.

Explain: “Due to” will not work here because it would be trying to modify the clause, “game was lost,” instead of a noun.

3. The soup was cold because of the inattentive chef.

Explain: So as the sentences we have talked above. Besides, “due to” will not work here because it cannot be substituted by the words “caused by.”

Other Conditions to Use Due To

Given the above mentioned “due to” grammar rules, you might need to pay attention when using it. What's more, it can still be used in other contexts, such as replacing words such as “payable to” or “supposed to.” For example, “due to” can be used in the following way: “The bill is due to the accounts receivable manager by Monday morning.” “Due to” is being used instead of “payable to” in the above sentence and is referring to the payment of money.

In another example, “due to” can be used in the following sentence: “The bus is due to arrive in three hours.” Here, “due to” is used to replace “supposed to.”