Who Are The Disciples of the New Dawn?

Back in August of 2013, a very mean hate page surfaced on Facebook. The owner of the page threatened pagans and attributed certain practices to paganism, including cesarean section births and not teaching kids about Jesus which will lead to prostitution and sodomy. The page disappeared but this violent hate group, Disciples of the New Dawn has resurfaced with just as much hate and judgment of others.

In all honesty, the posts and memes are very ignorant and cruel towards others and the comments from the page owner to people who respond are very inappropriate. For someone pushing Christian principles, the language can be downright foul and many cannot believe the page is not a joke. Fact is, they are a very real group with a following that agrees with them. This article explores the Disciples of the New Dawn and what they believe. 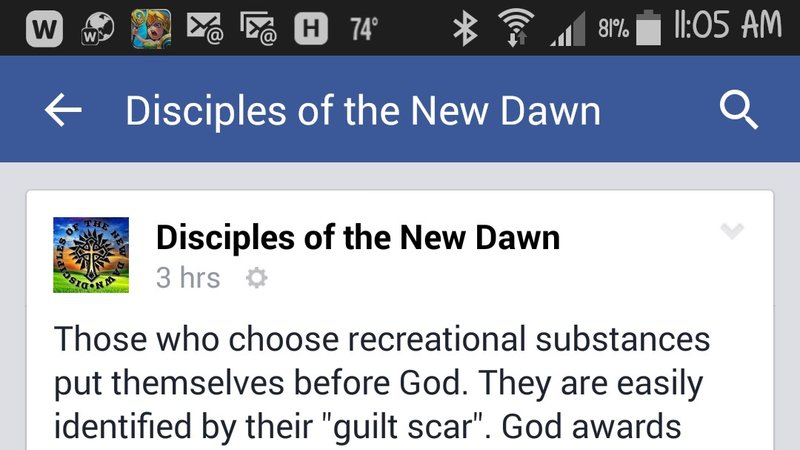 Who Are The Disciples of the New Dawn?

Some believe the Disciples of the New Dawn to be just a group of “internet trolls.” The reason for this belief is they go so far against the grain of true Christianity by speaking only in curse words filled with hate messages towards others. Internet trolls only post messages or argumentative comments to get a rise out of people and start arguments and then suddenly disappear. This group has started pages and then disappeared numerous times.

Information on this group states their mission statement as

“In order to escape the wretched communist dictatorship that now runs our country, we have taken our friends and family off the grid. Deep underground we are safe from the coming storm that will soon be upon this once great nation. When the dust settles and the radiation dissipates, we will emerge. There will be a New Dawn and our progeny shall rebuild this nation as a Federal Republic of Christ as God and the founding fathers intended. Amen.”

Claims are the group was founded in 1956 by Father Patrick Oliver Embry. They appear to have joined Facebook in September of 2014. They target Pagans and Wiccans and claim these people will “steal your children,” and “witches will ruin your lives.” They even go so far as to say that pagans should be punished with being burned alive. They also state that women who have natural birth are “superior” over women who had to have cesarean sections. Their opinion to C-section can be extreme: They think that if you were supposed to die in childbirth, that's the God's will, and you shall not go against the God’s will by having the C-section. They also have a meme targeting the “steampunk” culture that these kids whose mothers had C-section are an embarrassment to their parents and society. They state the culture practices hedonism and most likely has orgies and bondage sex.

Many people have been outraged by the group’s behavior, including Pagan groups who believe this is practice of violent hate speech that goes against Facebooks community standards. They have been successful in removing the group a few different times, only to find the group has found a way to resurface over and over again.

Interestingly, Father Patrick Oliver Embry spells “P.O.E.” Which leads many to believe this group is satire and only poking fun at right wing conservatives. The Disciples of the New Dawn claim that Father Patrick Embry is a very real person and has been around since 1956. There isn’t much information out there on him, but a little information could be found in conversations about him, “Father Patrick Embry is a very real person, but they say he is not a Christian Minister at all.” Claims have been made that he has mental issues, but seems to be a relatively harmless person.

Since the name, “Father Patrick Oliver Embry,” spells POE it could be attributed to POE’s law. This is a saying on the internet when parody is mistaken for the sincere beliefs of the author. This is because pages can be confusing of the author’s true intent. POE’s law is an implication that both sincerity can be mistaken for parody and vice versa. The Disciples of the New Dawn can fall under this law due to its confusing nature.

Disciples of the New Dawn and Cesarean Sections

There is outrage from mom’s all over the world with the remarks from this community that criticizes cesarean section childbirth. There are memes that insult moms that they didn’t actually give birth and took a route of “convenience” and labels C-sections as “sinful.”

Followers of Father Patrick Embry call cesarean section moms “lazy” and urge CPS to investigate these mothers for neglect of their children. They even go so far as to call women who give birth naturally “superior.” They even state they have a “Circle of Matriarchs” and post memes showing a cesarean scar. They speak of the proper role of women that denounces pain relief as toxins. They state,

“If God has decided to call you home, it is not up to you or the doctor to reject Him. You may find yourself cast into the lake of fire for doing so.”

Regardless of the intent of the page, women are fighting back. One mom claims:

“My baby was caught up in my pelvis and natural birth would have caused her death. I would then be a murderer if I had not chosen to allow them to do a cesarean.”

They also fight back with statements such as:

“Birth in any capacity is a blessing and miracle. This group is slanderous and disgraceful. These are hurtful and mean words to mothers everywhere. No matter how babies are born, they matter and their safety is important.”

This group also has several pages pushing “pro-gun” and “pro-life” campaigns. They also have a following of youths called the “junior disciples.” They show memes of Jesus surrounded by children and guns and speaking of the “right to bear arms.”