When you are a kid, you may be scared to see a lizard on the wall. Just seeing a small lizard may refrain you from going to the kitchen or washroom until someone accompanies you and scare away the lizard. If a small lizard has a terrifying effect on you, then, you have to consider what will be your reaction when you see the biggest lizard – Komodo dragon. Big lizards are dangerous and you will be surprise to know that Komodo dragon is the deadliest and scariest animal. 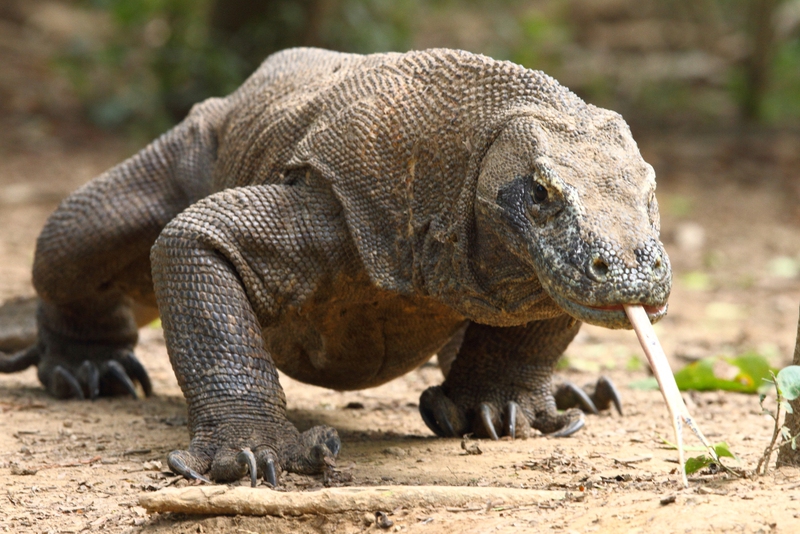 If you live in Asia, you are likely used to see small lizards on the ceiling, trying to catch an insect. However, small lizards are nothing in size compared to the Komodo dragon. The Komodo dragon is the biggest lizard. The average male adult lizard is around 2.5 meters in length and may weigh around 50 – 70 kilograms. The biggest lizard ever recorded was more than 3 meters and had weighed 166 kilograms. The reason behind the variation of weight is that Komodo dragon can eat up to 80% of their own body weight in just one single meal.

When it comes to behavior, the Komodo dragon is a solitary animal except during their mating season. However, the biggest lizard form groups to hunt and to feed. Even though Komodo dragons are big, they are very agile and can climb trees. They have the ability to run with a speed of 20 kilometers per hour.

Komodo dragons can eat almost anything, including its own eggs. It will also attack any animal living in the area including deer, boar, snakes, buffalo, monkey and even wild horses. A small adult Komodo, which weighs around 40 kilograms can kill a much bigger Sunda deer by striking and knocking the deer off its feet, then, the Komodo will start tearing the deer with the use of its claws and serrated teeth.

Any animals that survive from the attack of the biggest lizard are likely to die from infections because of the toxicity in the saliva of the Komodo dragon. The saliva contains 50 strains of bacteria. Bacteria present in the Komodo dragon saliva is very deadly and can kill any animal within 3 hours. But recent studies show that aside from the bacteria in saliva, Komodo dragons also have venom glands in the jaw, making it more deadly. Komodo dragons have the ability to inject toxins in their prey. The venom loaded with toxins may stop the blood from clotting. The prey will then bleed to death and eaten dead or alive afterwards.

Most Komodo dragons are found on the Indonesian islands of Rinca, Flores and Komodo. Few Komodo dragons live on Gili Dasami and Gili Motang. They prefer living in hot dry grasslands that are near the place of volcanic activity where there is little water but has a high temperature. In the Komodo National park, the numbers of Komodo dragons are well monitored.

To know more about Komodo dragon, you can watch the video below:

Other Large Reptiles You May Want to Know

Large reptiles are found in any place around the world. Some of the largest reptiles are near extinction while others thrive to live in their natural habitats or some in zoos. Some species of reptile can weigh 2000 lbs. or as heavy as automobile. Some of these large reptiles feed small spineless jellyfish but some are reptiles are man-eaters.
1

Attacks on humans are considered rare but they are responsible for several human fatalities in the past.

Saltwater crocodiles treat humans as prey and there is a long history that they attack humans that go astray in their territory. The exact number of attacks is limited outside Australia but 1-2 attacks are reported in Australia per year.

Tuataras are reptiles that are native to New Zealand. The tuatara resembles lizards and they have green brown and gray color. Their measurements from head to tail are 31 inches and weigh 2.9 lbs. Tuatara appear very unusual since they have photoreceptive eye or "third eye". The photoreceptive eye has its own lens, retina, cornea and nerve connection to the brain but this eye is only receptive to hatchling after 4-6 months, it will be covered with pigment and opaque scales.

Tuatara feed on frogs, bird's eggs, chicks and lizards. Tuatara also preys on eggs of seabirds, which provide them important fatty acids. When it comes to behavior, tuataras are territorial, they will likely threaten and bite intruders.